When evaluating whether to suspend a hotel’s operation and/or preparing a forecast of a hotel’s future performance, consideration must be given to the hotel’s operating leverage. This is an important dynamic that really impacts the bottom line of a hotel and hence is paramount to understand for any owner and investor.

Hotels operate with a high level of fixed expenses. These expenses remain in place regardless of the hotel’s revenue level and include costs relating to:

Whereas, variable expenses can be adjusted in tandem with occupancy levels. These include:

For this reason, EBITDA can decline significantly during a downturn. Below a break-even RevPAR level, a hotel’s EBITDA will turn negative, as is currently the case for many hotels. Once RevPAR rebounds, hotel EBITDA can increase significantly as positive operating leverage returns. This explains why hotels are extremely popular investments once EBITDA bottoms out and revenue begins to recover.

To illustrate the influence of operating leverage on hotel EBITDAs, the following data evaluates the impact of the 2008/09 downturn on hotel revenues and profit levels, using data from HVS’s database of hotel operating statements for full-service hotels. 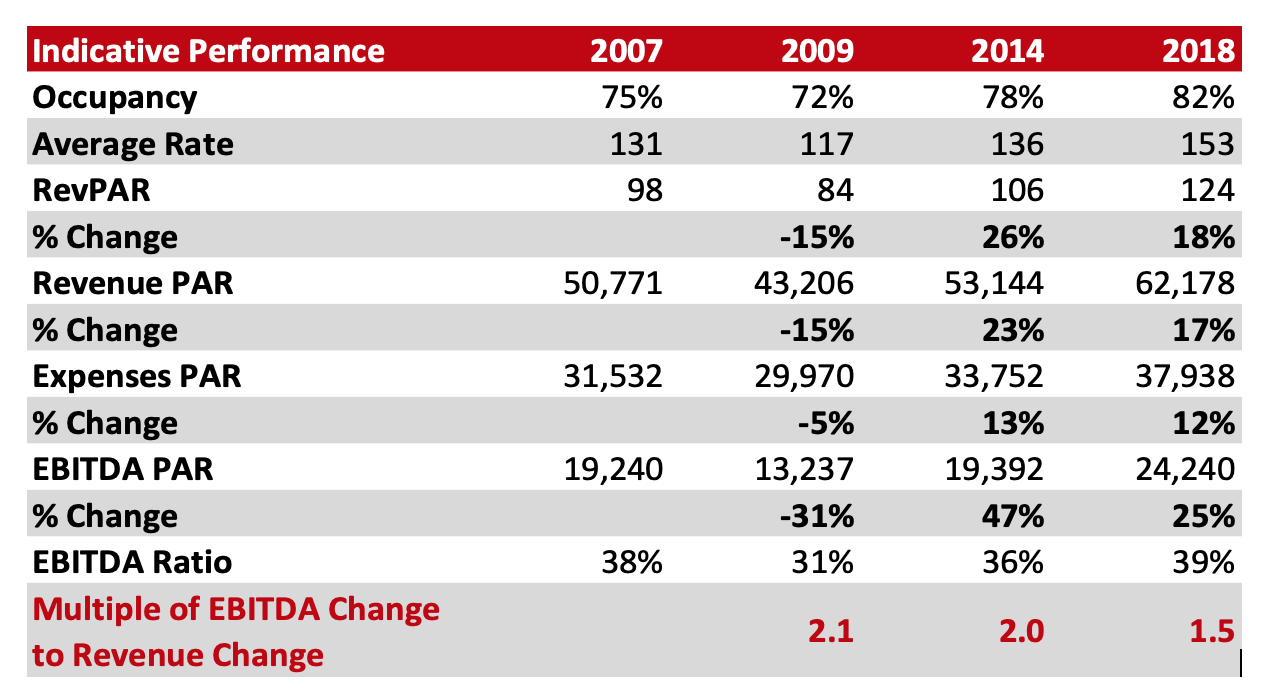 In this example the flow through from revenue to EBITDA is 38% in a good year such as 2007. In a downturn scenario, such as 2009, a decrease of 15% in revenue contributes to an overall decrease of 31% in EBITDA, a doubling effect or multiplier of 2.

If we then look at another strong recovery year, such as 2014 in the above example, we can see that a RevPAR change of 26% or a growth of total revenues of 23% has more than double the effect on EBITDA showing a staggering 47% increase.

In a more stable year with less growth this multiplier comes down to 1.5 (see year 2018 above). The industry rule of thumb is that for every €1 of revenue decline a hotel’s EBITDA declines by €2. The data confirm this rough 2:1 relationship.

Currently many hotels are experiencing the negative leverage that amplifies the decline in revenue to the bottom line. However, as the market bottoms out and demand starts to pick up we will see the reverse, positive effect. This is when investors are keen to come in as they will make a strong return on investment in a short period of time.

Full-service hotels have a stronger EBITDA leverage than limited service hotels because they can adjust their revenue base and cost base to a greater extent. Watch this space!